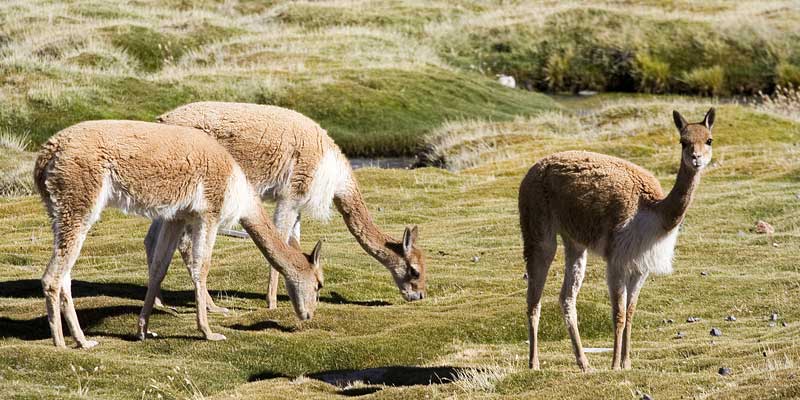 The vicuna lives in the Andean Cordillera, nell’Equador to the ends of the north, Chile and Argentina. As in the past was a victim of poaching more foolish, and in Peru in 1964 were only 5000 pieces, in 1967 it was created on un’areadi 6500 hectares, the National Park of Pampas Galera, so the vicunas through surveillance and tranquility took to be propagated to the point that it was necessary to extend the experiment, and today are more than 50,000 heads surveyed. It has been estimated that Peru could theoretically have 15 million hectares of arid and inhospitable highlands and not suitable for other productive activities, to raise up to three million head. Unfortunately, the political, economic and social benefits in the area are such as to consider all this just a beautiful dream.
The vicuna is a small and graceful animal with a long neck, a small head, shy and sensitive, but quick movements, requires large areas and for this reason it is very difficult to breed them. The chest and belly are white / cream and the base of the neck has a collar big hair long and 20-30 cm, making it immediately recognizable. He has very strong teeth incisors that grow continuously and sharp burning up tufts of grass or hard as tow a kind of creeping sassifraga as the moss / lichen. He, like all animals have to endure large temperature excursions, a fine undercoat, the finest in the world 10-12my of 30/50 mm long, covered with a coat of long hair and relatively coarse, about 30my.
The vicuna female after a gestation of 10 months gives birth to a single small, rarely two, and always at the rising of the sun because it has to dry out, able to stand on the legs to be able to follow it and escape the condor and puma before the fall of the evening . In six months the cease-feeding and young people begin to graze on their own that up, about a year, reached sexual maturity, whether male, the father the game from the pack of about 20 females of which he is lord. The young males living in flocks, and when comes the season of love begin love the classic tournaments very cruel, because you are fighting to try to emasculate bites the enemy, until one of the contenders do not withdraw. Hair, meat, skins were since ancient Incas privilege of kings.
Although even then, the vicuna was protected by strict laws, even with the death penalty, periodically in different places and some animals were driven into the fence and caught for consumption of local populations. The animal is so sensitive that when he dies easily captured for cardiac arrest.
It seems that the Peruvian government has accumulated about 2,000 kilograms of vicuna hair and has been or will be processed locally and used for the promotion of Peru at high level. There is only hope that the general conditions of the South America and improve the trade and the textile industry have the opportunity and privilege to deal with this “fiber of the gods.”