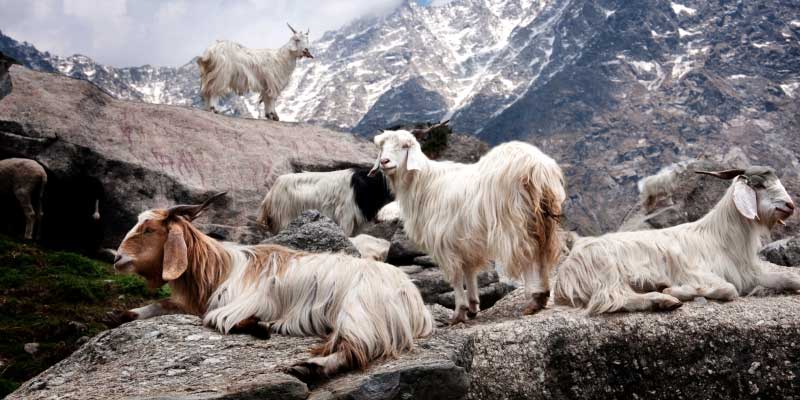 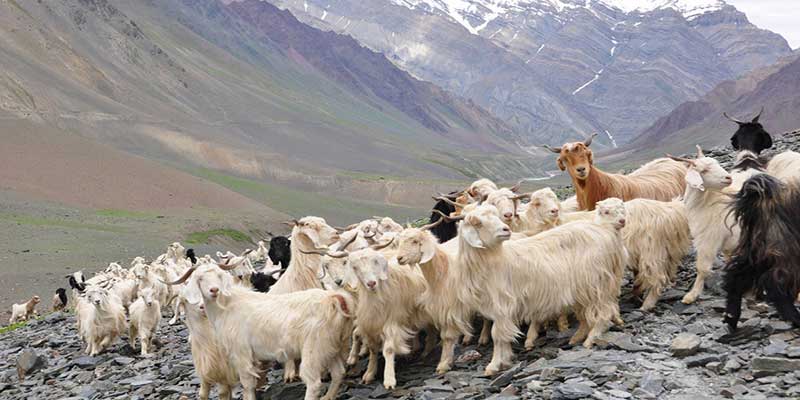 Like the sheep, the goats began to be domesticated in Mesopo Tamia and then spread during the Neolithic period, initially with  shepherds and later agricultural farmers, on the continent of Europe and Asia, where they were  found in great quantities, because the animal is very hardy and survives on the most inaccessible terrain providing only poor nutrition . Over time two types of goats have developed: a long hair and short hair. The size is 55/65 cm in the shoulder, weight 25/40 kg according to age and gender.
The goats with  long hair have  a double coat: the  outer hair 30/50micron 120/150 mm long produced by glands in primary follicle  that serves as protection against external agents and a very fine undercoat  14/20micron (on the basis of ‘ age, sex, area  and breed ) 30/50 mm short product from a variety of secondary glands, acting as thermal insulation. The undercoat is commonly called “Cashmere”, it seems that the name comes from Kashmir, because this region was crossed by the “Silk Road” from the ancient capital of  Xian to Imperial Rome. The widest area  is from the Middle East to Korea following the  and mountainous desert  chain of Central Asia.
Indeed, the most important producers of cashmere are China, Iran / Afghanistan, Mongolia and there is a small production in neighboring countries and now also in Australia and New Zealand. There are reports of trade between China and the Middle East even before the Han dynasty (206 BC – 220 AD). It was essentially a network that connected the caravan and commercial  cities and the methods of transport were camels, yaks and mules. Due to  the cost of transport caused by the long distances involved, they carried only goods of great value: such as  silk , and gold from the West. In the fifteenth century in northern India / Kashmir, there were already 60,000 people spinning Cashmere. In the early eightenne hundreds European travelers began to buy shawls and hand-made fabrics from Cashmere.
The seasonal cycle of the goats have a double coat of hair growth that starts  in summer, slows in autumn  and stops in winter, then comes off in the spring during the wet season. The Cashmere collection is done in late spring during moulting, by either combing the goat and removing  with a comb to pull  the fibre from the  normal fleece , or by shearing. Subsequently, the fibre is divided by color from white to dark brown and then washed and passed on dehairing machines that separate the fine fibre from the coarser , and yields can vary from 60/65% to 5 / 8% depending on the method of collection, combing or shearing, and of course by breed  and area of origin. The amount of fine fiber produced per head of course also depends on gender and breed  and can range from 25 grams to 500gr in the greasy state.
The finest hair is obviously used for the production of fabrics and sweaters of the highest value, while the long hair is used for ordinary interlinings  and in the Middle East it is spun and twisted, even today, by hand , for the production of tents for the nomads. They tends to breed goats in the  areas of poor forage in the more backward areas whilst  prefering  to promote the breeding of cattle, pigs and sheep in the most fertile. Flocks are about 40/50 each and goats in lowland areas in summer graze with sheep and horses cared for by shepherds always looking for new pastures, while in winter they are collected in the vicinity of poorly mantained villages  and fed with hay, straw, maize foliage  . As with wool, pure nutrition  produces a finer and shorter fibre , and of course,  in lesser quantities.
As mentioned, the majority of cashmere comes from socially and culturally backward areas, since despite the high prices of the final products, originally the goat produces a few grams and the time taken for the collection is about half an hour per head. Fortunately the flesh and pelt give  more profit for the farmer. Cashmere originally for the most part is collected and packed in anything that comes to hand –  cotton fabricsor  polypropylene bags previously used for grain or fertilizer. In recent years, the cashmere-producing countries tend not to export any greasy material  when it has been collected, but they want to carry out all subsequent processing up to the finished product, to derive the greatest value possible.
Currently the largest producer of cashmere: China, Iran and Mongolia will export mostly dehaired  locally but, apart from some very good productions in ‘nner Mongolia, much of the exported product is contaminated by polipropilene fiber and vegetable matter  due to little care being taken  and no knowledge of the problems that this contamination can cause  in finished products. (Not to mention the real commercial fraud). In Australia and New Zealand over the past decade they have started the production of cashmere and it has been  their experience that  10% of goats can be introduced in herds of sheep with a significant improvement of pasture, as they prefer to feed on shrubs and burrs  before grass and the wool of the sheep was consequently cleaner. Given the vast experience of farmers in Australia and New Zealand they believe that the quality and  the quantity produced will improve greatly in the years to come.