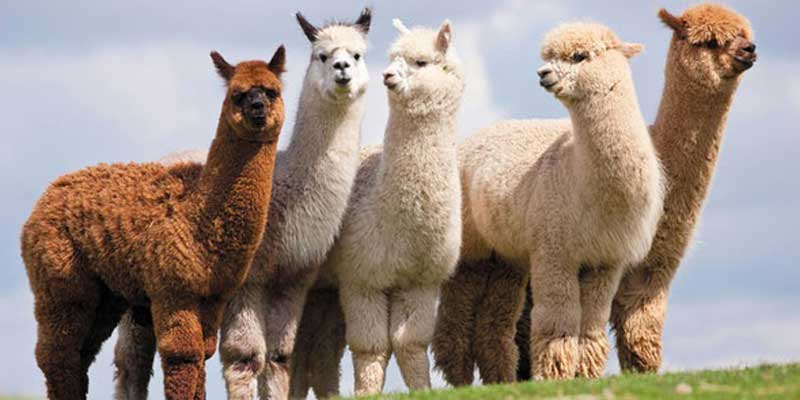 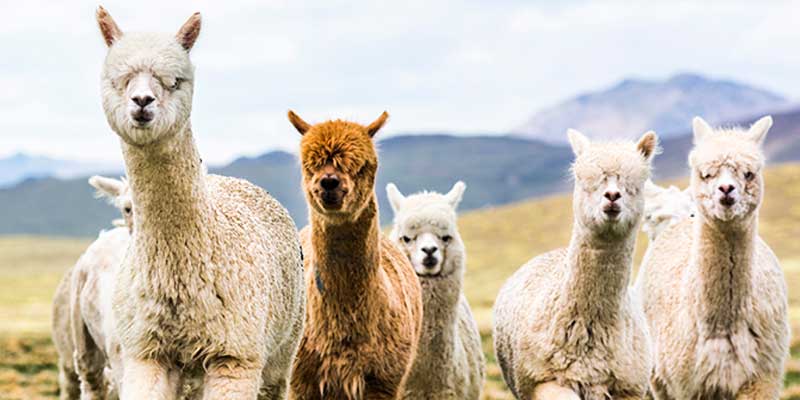 The Alpaca belongs to South American camelids that differ from those of Afro / Asian origin  and take the name of Auchenidi (eg Auquenidos, greek Auchenios). The main species that live in the Andean altitudes are the Llama (Llama glam) the Alpaca ( Llama Pacos) the vicuna (Vicugna Vicugna) the Guanaco (Llama huanachus).
The Alpaca (Llama Glam Pacos- Huacaya subspecies to be precise) was domesticated with the Llama in the highlands of Lake Titicaca on the border between Peru and Bolivia around 4000 BC, but the breed was developed under the empire of the Incas the ninth-century . In 1834 the British imported Alpaca fibre for the first time in Europe. The greatest number of these animals are bred in Peru (80% of production), mainly for the quality and quantity of fibre .  Huacaya is the most widespread (90%) weighs about 80-90 kg and is about 90 cm high at the shoulder.
There is another species called “Suri” which produces a wavy and glossy fibre hair of 25/26my – 60/90 mm and is only 10% of production and is used for fine fibre cloth . The production of alpaca in Peru is 3 million kili. The flocks may be 4-5 up to 50 heads and there are a few farms or cooperatives from 3000-5000 heads. The pastures are located in areas between 3000 and 5000 metres where  the temperature differences  are significant, + 16/17 ° C day and -20/25 ° C overnight. The males produce a heavier coarser fleece  from which it derives the commercially recognised Coarse Alpaca 32/34my – 60/110 mm –  This amounts to 20% of production. 1/ 2 year old males and females produce a finer smoother fibre  of 24/28my – 50/80 mm  – this is about 65% of production.
Baby alpacas are  born after 11 months of gestation, usually between December and March during the rainy season , usually in the morning and, if born at night, most die due to the cold . The baby alpaca when  sheared  after 8 / 10 months produces a silky 21.5 / 22my – 50/70 mm fibre  and makes up1-3% of the clip.  The Alpaca is the only camelids that produces a wide range of basic colors: white, black, cream, fawn, coffee, brown, and some fleeces contain mixed shades . The average weight  of the fleece isabout 1.5 – 3 , 5 kg, depending on the age and sex and the time of shearing. The peasants-pastoralists Indians raise about 3 million head of domestic alpacas  living in desolate plateaus and valleys, he vast majority in lonely huts of stone or a mixture of soil / dung / straw depending on the nature of the surrounding terrain,  the roof and the doors consisting  of Llama skin , very distant from populated areas.
The methods of rearing and shearing are primitive and the fleece is collected and rolled up and  are then taken to  the closest populated centres where there is road transport and then it is either bartered  with flour, sugar, oil, canvas, etc..or sold to middlemen or collectors, which in turn are taken to warehouses or factories where the  hair is carefully selected for fineness, length and colour.
There are other types: Baby, Suri we have already mentioned, plus the Llama and Huarizo, but in these types the range of colors is much more limited, usually 6. Alpaca meat is very tender and is consumed locally and the leather is of excellent quality. The Peruvian government seeks to encourage the processing of the fiber locally to achieve greater value added in export of yarn and fabrics and to promote industrialization and employment.
The Alpaca is used mainly for outer  knitted garments and fantasy yarns , but also for jackets and coats in both the precious natural and dyed colors on white. On  the 23/02/1984 was founded the International Alpaca Association based in Peru, to promote the use of fiber, improve the farming, breeding and quality, to defend the authenticity of the products identified with the Alpaca Typical mark. Members are  some of the most important farmers, processors and traders of Alpaca.